Perrin et al show that ECT reduces left frontal connectivity, specifically in Brodmann Areas 44, 45 and 46. 44 and 45 are Broca's region and 46 is implicated in attention and inhibition. Of special interest, anterior cingulotomy for refractory depression resects the same area. One interpretation of these results provides further support for the hypothesis of depressive realism and working memory (and anterior cingulate + DLPFC) hyperfunction in depression. 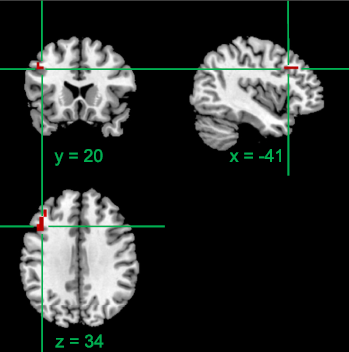 The strange properties of subjective experience are nowhere more evident than in the use of drugs which prevent long-term potentiation - or destroy the capacity for consciousness in the first place. Is there anything it is like to be under anesthesia, or do you just forget that you were tortured?

Note, Harris's focus here is about free will and morality - and to his detriment he completely neglects the robustness of epiphenomenal accounts to the neuroscience experiments he's citing, probably because few people would find an epiphenomenalist account of free will no less distasteful than a total absence of free will. But the question here sends him down an interesting road, and to my knowledge the first clinical test of the global workspace hypothesis of consciousness was in fact by a team of anesthesiologists.

Posted by Michael Caton at 4:16 PM No comments:

Direct Observation vs. Filtration Through Others: A Key Driver of Difference of Belief

Previously I asked whether lack of (or slow) belief propagation might actually be a defense mechanism against harmful beliefs from agents with mal-intent being implanted. It turns out that even when given common priors, in this experiment people gave more weight to things they observed or concluded themselves, rather than those communicated by other participants. Via Overcoming Bias; and of direct interest to the decision-theory engineers at Less Wrong.
Posted by Michael Caton at 12:38 PM No comments:

The Least Surprising Thing Ever

"Although we also ran the learning task with high-dose ketamine, performance was inadequate and we will not report this part of the study further."

It's been theorized that some combination of widespread literacy and large groups of people speaking the same language should slow language innovation. And indeed, mining Google's English corpus data, we see a growth rate of about 8,500 words a year, and it's slowing - but another theory put forward is that the marginal utility of new words is decreasing. One reason that we start using new words is to describe new technologies, and technology certainly hasn't slowed down in the previous centuries relative to the ones before it, so it's hard to see how the marginal utility theory could apply.

Another study to test this could be to see whether new technologies are being described by new combinations of words, or by words that have undergone semantic drift (same word applied with new meanings). This would be harder to do because the machines would have to parse semantic content, and if we could do that well we'd already have lots of Turing-test-passing computers.
Posted by Michael Caton at 8:06 AM No comments:

Lack of Belief Propagation as a Defense Mechanism

A problem with human beliefs - verbally professed coherent statements about the world - is that we don't automatically apply their implications to all our other beliefs and behavior, and we end up behaving inconsistently.

Note the qualifier "coherent". There are lots of claimed beliefs about the world that don't amount to a coherent truth claim, or that alter understanding about the world. Many of these have to do with signaling social afiliation, especially with religion, nationality or ethnicity, and even sports teams. But this post is not about those.

Let's take an example: someone starts telling their fellow Southern California residents that they should prepare a kit and a plan for future fire evacuations, since destructive fires occur more often than earthquakes (this is especially true in San Diego County, given the path of the major faults). However this person does not himself prepare a kit. This is not because he actively thinks he's somehow safe from fires, but rather because it just never occurs to him to propagate his new belief to his other beliefs and behaviors. (As you might be guessing, this was me.)

The most severe failure to propagate beliefs occurs in delusions, where there is a fixed belief that is given absolute weight, and conflicting beliefs are discarded or interpreted so as not to be in conflict with it - when, that is, they're compared and noted to conflict. But relative to our long-term memory, we have small short-term (working) memory - we can't call all of our long-term declarative memories (our beliefs) into short-term memory to constantly update them. This mismatch is true of all humans, not just those of us with delusions, although it's possible that one reason people have delusions is because of a working memory deficit. Consequently, there's no guarantee that we've updated all our beliefs when we develop a new one, even if we consciously attempt to sort through all beliefs that the new one may impact. This failure to completely propagate beliefs is a sin of omission, and doesn't include some of the sins of comission we find in reasoning biases that prevent us from doing so, like confirmation bias.

Of course, beliefs can be false, and lead to bad decisions that damage the agent, and all humans have some false beliefs. Because we develop false beliefs, and what's more language allows other agents with ill-intent to implant false beliefs, it's worth considering that an immediate propagation of a new belief through all our beliefs and therefore behavior might not be in our best interest. You might make the argument that complete propagation would make the agent more likely to identity the new belief as false since it could be identified as inconsistent with the rest of teh agent's beliefs. The challenge is that we still can't guarantee all the other beliefs the agent has are true, if only because they're all developed with limited information.

Therefore, it's worth considering whether rapid propagation of beliefs might actually be selected against, because it produces naive agents more likely to be taken advantage of by other agents.
Posted by Michael Caton at 8:21 AM No comments:

Languages with obligatory future tense marking have higher future discount rates, across a host of behaviors. So far the paper seems solid and this observation is pretty amazing. In terms of obvious implications, this sure beats distance and color classification!

The obvious speculation is that future time marking increases the cognitive distance of future plans. It's immediately more interesting that many languages use future tense or future tense-like constructions for their subjunctive. If we put future discounting into procrastination equation terms, we could say that placing future acts into further away, less concrete categories is raising the delay, and/or lowering the expectancy.
Posted by Michael Caton at 1:49 AM No comments: