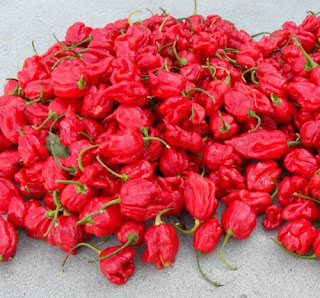 
Trinidad scorpion peppers are the hottest peppers in the world, and will actually blister your skin if you touch the oil. If Clive Barker bred his own pepper, these would be it. (1,500,000 Scovilles; compare to a jalapeno's 8,000.) Back in May, for some sadomasochistic reason, my friend had a party where he invited people to a feast of these Lovecraftian abominations. Surprisingly, some idiots accepted his invitation. Not surprisingly, all of them had Y chromosomes. Even less surprisingly I was among them.

The reason I'm posting this here is because my otherwise inexplicable behavior afforded me a chance to test a theory. Years ago, I'd noticed that when I'd put too many jalapenos on something, a minute later I ate some spicy but not really hot barbecue sauce, and thought I noticed that the heat abated quickly. If the heat is caused by different capsaicinoids (a critical assumption as it turns out!) it's possible the barbecue sauce capsaicinoid acted as a partial agonist at the receptor, decreasing the heat from the jalapenos. The agonist for the current experiment would be the scorpion pepper, and the partial agonist, Tabasco sauce. Many of the people at the party were medicinal chemists who were interested in this hypothesis; specifically, in watching someone else test it. Medicinal chemists are bad people.

The stakes were high: if I failed, not only would my theory be falsified (in front of a bunch of medicinal chemists no less) but I would be in considerable pain. As if to highlight the risks, when I got there the host was walking around with an ice pack under his shirt, and the only guy that ate a whole one was actually crying from the pain. (Warning, language. Trust me, if you did this you would have language too.)

But I don't think this can be considered a valid result until it's replicated. Perhaps you would be interested in being a subject?
Posted by Michael Caton at 8:07 PM No comments:

Literacy has strong similarities to synesthesia, and indeed is really a form of learned synesthesia. If you can read, you look at visual marks and automatically, involuntarily experience sound and meaning. Yes, these sense- and meaning-associations are initially learned, but they then become automatic. Even when you encounter marks that resemble characters in your language that are the chance result of natural processes - for example, a rock-arch that looks like the letter A - you can't look at it, and not think "A". (To understand what I mean by "automatic", go learn 10 characters from a writing system you don't currently know, and then find a website using that writing system. Understanding the characters is effortful, and by not concentrating, you can look at it, and not think of the sound or meaning.)

Since the serious study of synesthesia began with Francis Galton, it has also been noted that synesthesia runs in families, and that these families are enriched for artists and poets. This has led to the idea that the basis of synesthesia is some genetic influence resulting in insufficient cortical "pruning" in early life; extra fibers are left in areas like the fusiform or superior temporal gyrus, and this leads to color-grapheme or color-sound synesthesia. (An interesting implication is that infants and toddlers may actually all be synesthetes, prior to pruning.)

It stands to reason that if synesthetes are able to more highly associate sensory and meaning experiences, rates of dyslexia (if writing is a form of learned synesthesia) should be lower than in the general population. Doing a web search for this, I inadvertently found a synesthesia discussion forum where participants reported a higher-than-average rate of dyslexia. (Note, you won't have to rely on this dangerous foundation of anecdotal internet discussions for long; but in any event it was interesting that the possible correlation was the opposite of my expectations.)

Now along comes a new Ramachandran paper with David Brang (previously at UCSD, now at Northwestern) using made-up characters in varying colors. Grapheme-color synesthetes have a harder time learning new color-character associations than the rest of us. Extending to dyslexia, it's as if synesthetes' neuronal connections are richer but less trainable. Color-grapheme synesthetes report that it's unpleasant when real characters are printed in colors other than their "normal" synesthetic ones, much like they're constantly taking a Stroop test.
Posted by Michael Caton at 4:19 PM 3 comments:

Japanese anatomists have shown that careful dissection of the upper lip shows vestigial vibrissae (whisker) muscles in a third of humans. You know how your cats whiskers go back if you touch them there or they're just annoyed about something? Those. Apes are strange among mammals for not having vibrissae; in particular rodents are thought to construct their pictures of near-space with their whiskers rather than their eyes, and interestingly vibrissae sensory nerves are afferent trigeminal fibers, many of which pass through the superior colliculus, a midbrain visual structure.
Posted by Michael Caton at 10:43 PM No comments:

Toward a Physical Measure of Utility

"Electroencephalographic Topography Measurements of Experienced Utility", emphasis on experienced. Pedroni A. et al, The Journal of Neuroscience, 20 July 2011, 31(29): 10474-10480. The response they measured unexpectedly increased disproportionately increasing reward, i.e. it did not demonstrate diminishing returns but rather the opposite.

A measure of the mismatch between decision and reward utility, and understanding its biological basis and how it differs between individuals, would be excellent for psychology as well.
Posted by Michael Caton at 12:49 AM No comments:

Other Non-G Explanations for the Flynn Effect Besides Re-Testing

Armstrong and Woodley argue that the documented rise in measured IQs is a result of test-takers applying rule-based approaches to tests, resulting in an increase similar to that seen in re-testing. They're arguing that in large part, it is a testing artifact. They make several predictions about what we should observe if their rule-based model is correct. For instance, that measures of crystallized intelligence (i.e. vocabulary) should not rise or not rise as robustly, and they haven't; that most obviously rule-based tests (like Raven's progressive matrices) should show the strongest effect (they do); and that we should expect the gains to appear when countries undergo demographic transition including standardized education, and the rate of increase should correspond to the rate of the transition.

To this last point, it's worth pointing out that there are many other less interesting medical explanations for why intelligence might actually be rising. Specifically, lower parasite load due to public sanitation and better nutrition in early childhood are very good candidates for why the Flynn-type gains are most pronounced in Europe, Japan and Korea in the periods when they were observed. It's hard to make the argument that lower parasite load leads to better cognitive strategies to game tests. It's also not surprising that if bombs are falling around your school and then they stop, the people tested after they stop may perform better - especially since even non-warfare jet and traffic noise has been shown to locally impair reading comprehension in students.

A second, neglected question is whether the abstract rule-based thinking required for the re-testing-type gains actually correlates to some other outcome, like personal or national per capita income, or life satisfaction. If the Flynn effect doesn't represent an increase in g but does correlate with economic growth, do we care that much?