An Obvious Healthcare Cost-Savings Proposal, That Doctors and Patients Will Obviously Resist

Arnold Kling draws attention to a proposal by Karl Denninger, which includes the following:


No government funded program or government billed invoice will be paid for medical treatment where a lifestyle change will provide a substantially equivalent or superior benefit that the customer refuses to implement. The poster child for this is Type II diabetes, where cessation of eating carbohydrates and PUFA oils, with the exception of moderate amounts of whole green vegetables (such as broccoli) will immediately, in nearly all sufferers, return their blood sugar to near normal or normal levels...This one change alone will cut somewhere between $350 and $400 billion a year out of Federal Spending and, if implemented by private health plans as well, likely at least as much in the private sector.

The tone gets even more pointed, and more accurate, further on.

Denninger further points out the core values-disconnect that makes talking about healthcare so difficult. That disconnect is that we are trading dollars and human suffering back and forth, and there's no way around this brute fact, ever, except to hide it from both buyers and sellers. This makes the system nauseatingly inefficient, whether we're talking about centralized planning or a free market.


Americans, and especially health care providers, do not want to think of health care as a commodity. The providers want to be paid, but they do not want to think of themselves as selling their services, so the payment comes from third parties and the price is hidden to consumers...All surgical providers of any sort must publish de-identified procedure counts and account for all complications and outcomes, updated no less often than monthly. Consumers must be able to shop not only on price, but also on outcomes.

This will be unpopular as both patients and doctors want to avoid responsibility for bad choices - but now that we're all paying for people to keep eating McDonald's and performing poorly-evidence-supported surgeries so they can buy a vacation home - we will have to make some hard choices.

Posted by Michael Caton at 10:20 PM No comments:

...before my residency's required psychoanalytic training ended and grades were in. This is the Freud Museum in Vienna, which used to be his flat and office, and is still a regular (nice) apartment building. (A hand-written sign taped to a current resident's door on the ground floor by the entrance explained in unsubtly annoyed German that the Freud Museum was upstairs.) I do have to admit a grudging admiration for Freud's self-promotion. At this point, I invite you to say pseudo-profound things in an Austrian accent about how my early life experiences led me to struggle against authority, I want to kill my father, etc. I loved Vienna and Central Europe generally, even including this museum. You will note I did grow a beard for the occasion, but at no point had a cigar. 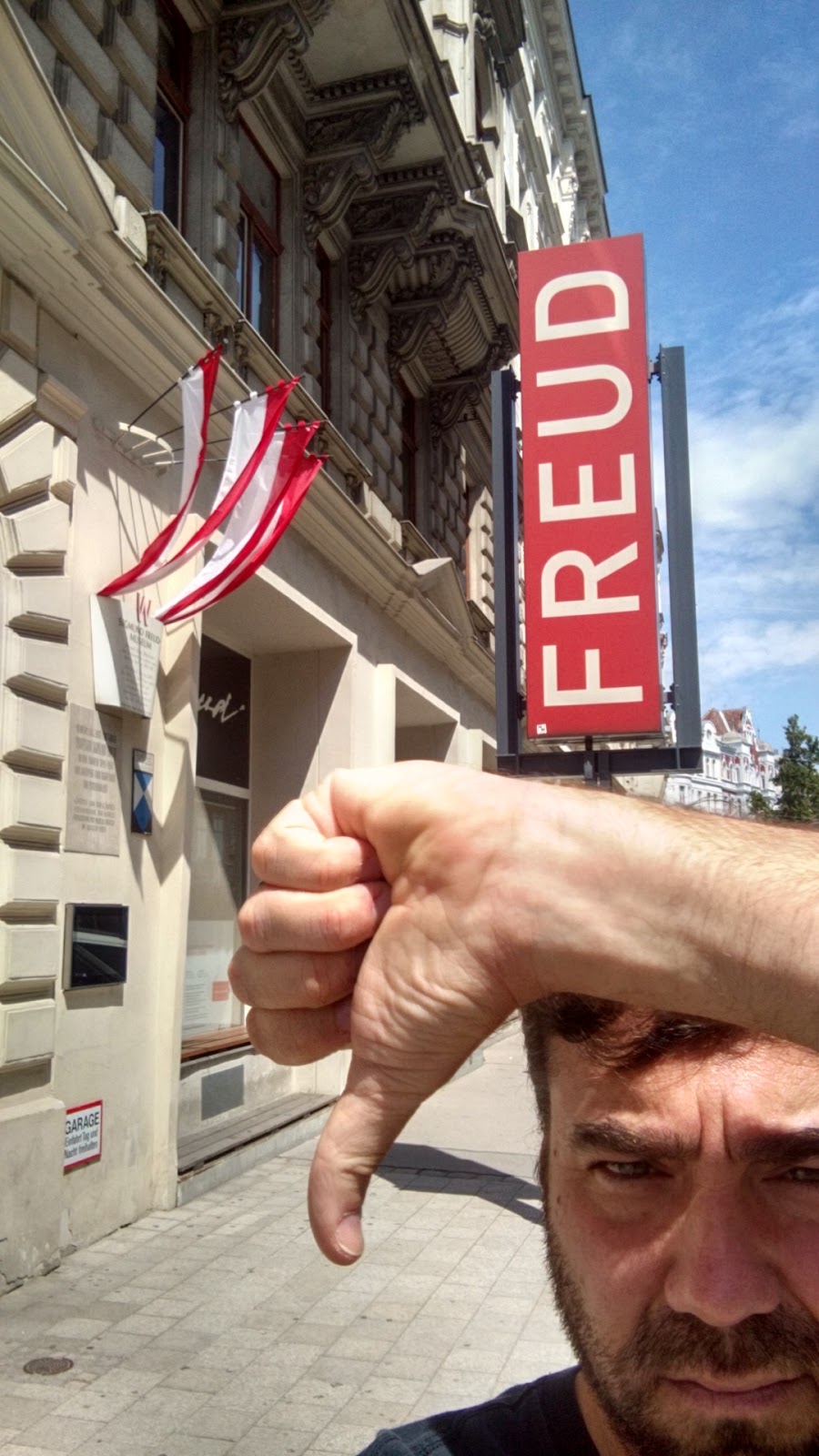 The most interesting thing in the museum was the microtome on display, which he used to make brain sections. I imagine him thinking, "You can never get anywhere doing it this way...maybe I'll convince people I have the power to do the same thing by talking to people!" There was also a picture of him with fellow Viennese intellectual socialites, one of whom was an immediately striking and intense woman who turned out to be Ludwig Wittgenstein's sister. Also, in German the parts of the subconscious are just rendered in German (not Latin), as "Das Ich Und Das Es" ("The Ego and the Id") which somehow takes away some of the authoritative punch.

Posted by Michael Caton at 9:33 AM No comments:

I once saw a translation of Beowulf from the early twentieth century, which used "throve" as the past tense of "thrive." Interestingly, this means that even the "modern" translation is now outdated, since during the twentieth century "thrived" replaced "throve." Language waits for no one.

I have noticed one particular shift in American English: "buck naked" has become "butt naked." No doubt readers younger than mid-30s will have never heard "buck naked" and wonder what I’m talking about. The explanation for the shift is that in some varieties of Black American English, the "k" sound at the end of buck becomes a glottal stop, which is then heard and reproduced as a t in most accents of American English. In conclusion - it’s BUCK, not butt, and you kids get off my lawn.

Also, many Californians pronounce the "-ing" verb suffix as "-een"; it's more prominent the further south you go in the state (Think Blink 182 - they’re from San Diego), which suggests it's from language contact with Spanish. When asked about this, people who clearly produce the morpheme this way, some people have insisted to me that they say it it the same as an -ing; this is common for people who speak non-received dialects that differ subtly, since they actually cannot hear the difference between the two phones. I once saw a young student learning to spell, write out a verb phonetically that way, ie "bildeen" for building. I mention this because as California becomes more prominent in American culture, I expect its dialect to become more prestigious, and people elsewhere will start imitating it - so by mid-century, people in e.g. the Midwest may be saying -een instead of -ing.
Posted by Michael Caton at 11:08 PM No comments:

Genesis is a project to seed bacterial life elsewhere in the universe, founded by Claudius Gros. The aim is to build spacecraft that would deliberately seed nearby exoplanets with bacteria, in geological time, kick-starting life in the universe. This gives those planets a head start on eventually evolving something like intelligence. This would seem not only to multiply the numbers of being capable of having lives worth living, but to dramatically increase the chances of an intelligence (a species with a life most worth living) that escapes its home system to avoid black swan apocalypses, singularities, etc. and spreads indefinitely, filling the universe with happiness.

A Parfitian could well respond that it's anything but certain that such a project would produce a universe-filling life form capable of happiness, and she would be right. But choosing an action with limited information is the problem with all action selection. On the spectrum of uncertainty, seeding the universe with life > friendly singularity > avoiding biological disaster > avoiding nuclear war > electing the right people in your country > cleaning your room. The problem is that the consequence to total happiness is in the same order.

So what's the argument for the pursuing a friendly singularity, over seeding exoplanets? Or singularity issues over cleaning your room?

I submit that we don't really know. That's not to say that the singularity or bio-apocalypse can't happen. Unfortunately I'm worried that as we become more powerful but not better at estimating uncertainty, something like this will eventually be fatal for us, and Drake's omega variable will be a little clearer.