The Physical Diversity of Uralic Speakers

The Uralic language family has always intrigued me. Partly it's because some people think that there is a Uralic substrate to proto-Germanic (see Kalevi Wiik); partly it's because Uralic speakers live in the center of a continent that is at once the center of the Old World, and in many ways not thoroughly explored with its interior still largely wild and uninhabited. But it's really intriguing to see how different Uralic speakers look from one another. They range from blonde, Scandinavian-looking, about-as-white-as-you-can-get Finns and Saami, to very Asiatic-appearing Nenets people in north central Siberia. Is this because there really aren't many genes for face shape, eye shape and hair type - that is, if you looked at, say, Germans and Spaniards genetically, are they genetically as distant on average as Finns and Nenets (just a few genes) but the differing German and Spanish genes don't happen to all be represented in easy-to-spot features? Or is there really a greater genetic distance? In which case, are these people whose ancestors adopted the language, or were they such a small group of hunter-gatherers running into big Turkic and Indo-European populations that their genes were swamped by whoever they met? 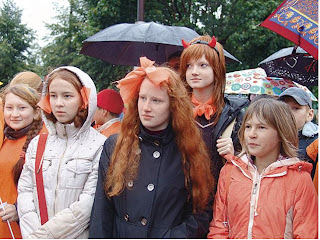 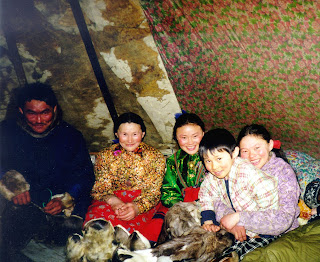 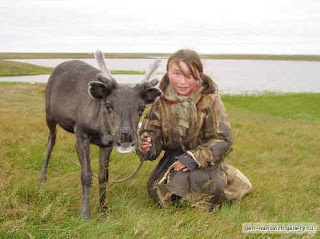 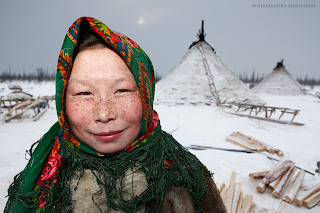 The interesting thing is that here the Urals form a fairly clear boundary for these genes. The Udmurts to the west (one of the groups above) are famous for being the most red-haired people on the planet, while on the other hand it's not hard to imagine that the Nenets family above is related to Native Americans and Inuit. (The Udmurts are the first one and the Nenets second, but I probably didn't have to tell you which are which!) But of course there is still cross-over between the two, and it's interesting precisely because most of us in the U.S. don't see these traits represented in the same people very often.

Posted by Michael Caton at 9:30 PM