How Steep is Your Empathy Curve?

Let us suppose that the great empire of China, with all its myriads of inhabitants, was suddenly swallowed up by an earthquake, and let us consider how a man of humanity in Europe, who had no sort of connection with that part of the world, would be affected upon receiving intelligence of this dreadful calamity. He would, I imagine, first of all, express very strongly his sorrow for the misfortune of that unhappy people, he would make many melancholy reflections upon the precariousness of human life, and the vanity of all the labours of man, which could thus be annihilated in a moment. He would too, perhaps, if he was a man of speculation, enter into many reasonings concerning the effects which this disaster might produce upon the commerce of Europe, and the trade and business of the world in general. And when all this fine philosophy was over, when all these humane sentiments had been once fairly expressed, he would pursue his business or his pleasure, take his repose or his diversion, with the same ease and tranquillity, as if no such accident had happened. The most frivolous disaster which could befall himself would occasion a more real disturbance. If he was to lose his little finger to-morrow, he would not sleep to-night; but, provided he never saw them, he will snore with the most profound security over the ruin of a hundred millions of his brethren, and the destruction of that immense multitude seems plainly an object less interesting to him, than this paltry misfortune of his own. To prevent, therefore, this paltry misfortune to himself, would a man of humanity be willing to sacrifice the lives of a hundred millions of his brethren, provided he had never seen them? Human nature startles with horror at the thought, and the world, in its greatest depravity and corruption, never produced such a villain as could be capable of entertaining it.

If we are honest, we all must admit that there are some people in the world we care about more than others. While we're horrified (at least in our culture) about the idea of having a favorite child, almost everyone is pretty quick to say they'd rather save their child than a stranger that they've never met. But how about ten strangers? Or a hundred "millions"?

Of course people differ. Someone with no empathy for anyone including him or herself (autistic; badly depressed narcissist) would look like this: 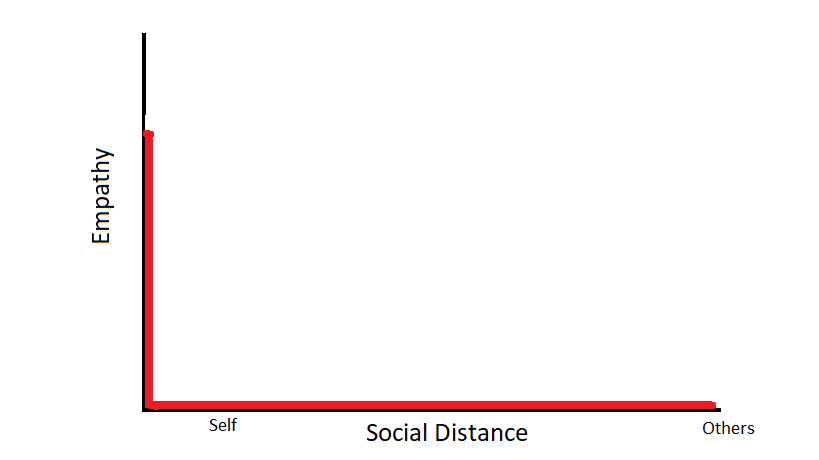 A narcissist, psychopath or very young child would look like this. 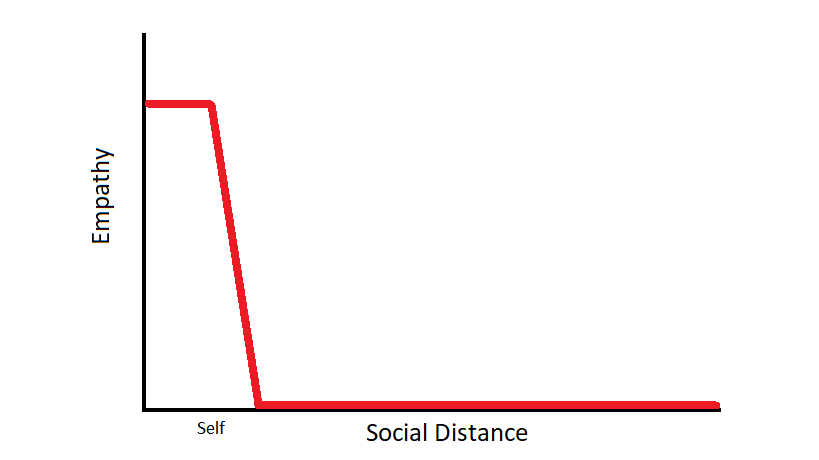 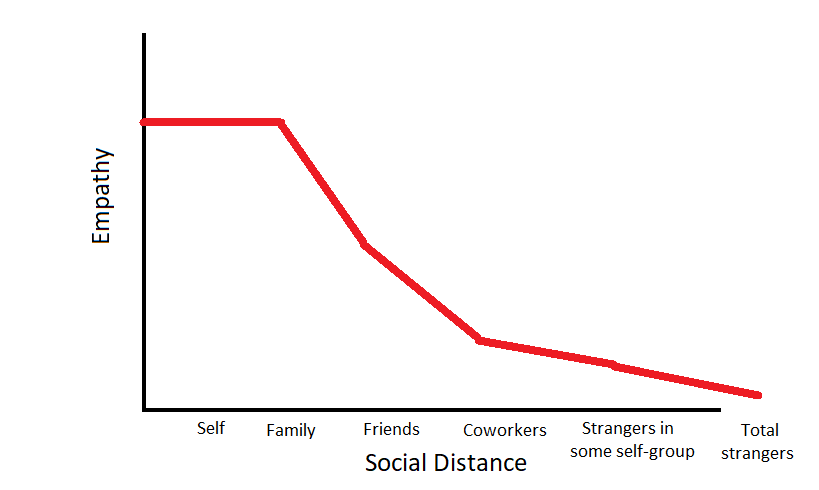 This is what many people want to look like, but probably don't. Scott Alexander noted that people on the left often make a point of showing empathy for people more unlike them. (Is this a stable strategy?) 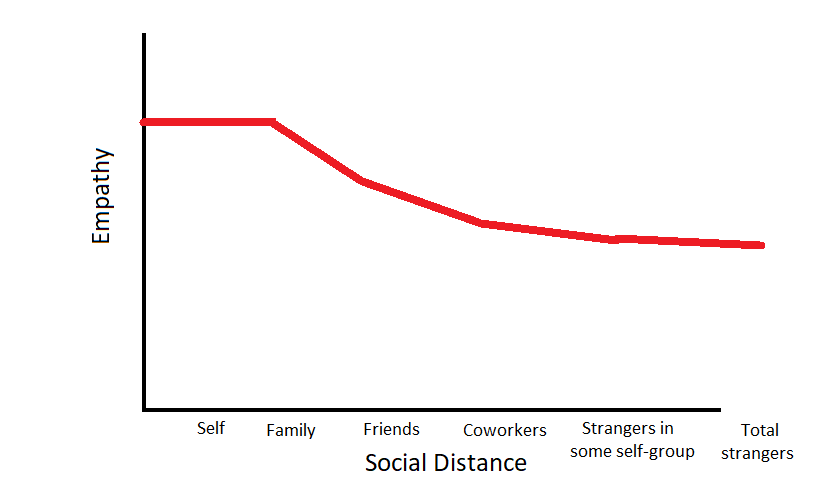 And finally, this is what the Buddha demonstrates, and how some progressive people claim to act - equal empathy for all beings (on the far right presumably are nonhuman primates, other animals, plants, etc.) 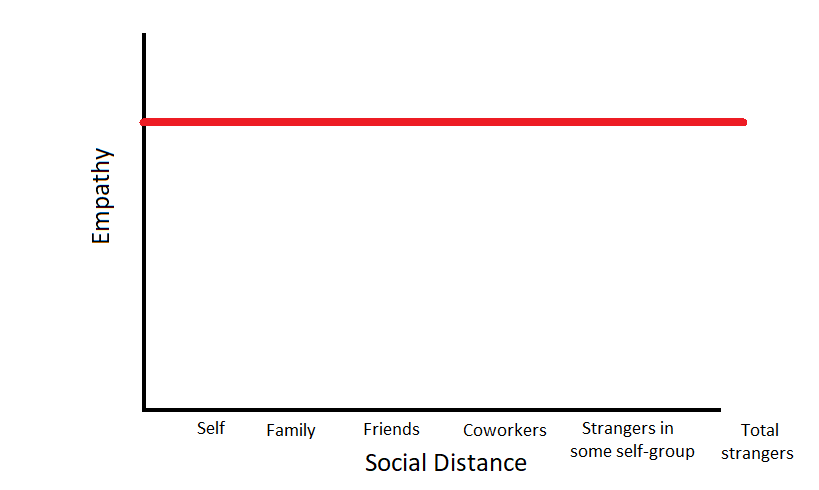 Of course these are all quick-and-dirty qualitative graphs to give you and idea, but they illustrate the hallmark of empathy curves. For most of us, empathy curves are sigmoidal - there is an inflection point at some level of non-self. Questions that are raised by considering this relationship are:

a) Before you get all excited that the graphs above are showing some progression toward a desirable goal - is it sustainable to show the same empathy to all others - either zero (narcissists) or full empathy (the Buddha)? Or even to show empathy in inverse proportion to how much like you someone else is? Empathy has real world impacts and there are obvious sociobiological reasons why most people's curves look like the third graph, but from a purely practical perspective, if your empathic behavior leads to your rapid extinction, it doesn't seem to be effecting much good in the world. The steepness of the empathy curve also produces a lot of the current political divide in the West - i.e., the less able to abstract a principle beyond their ingroup, the more contentious a faction.

b) Empathy curves can change over time for an individual, and finding what else is different about individuals who undergo change (neuroanatomically, psychologically) may be informative. For example, in psychiatry, there is the concept of the "burned out" antisocial, the person who commits vicious crimes indicating low empathy when he (usually he and not she) is younger. Then after about age 40, the same person is much less likely to commit further violent crimes. My speculation is that these people are not burned out but rater finally "grown in", i.e. their orbitofrontal cortex has finally produced enough synapses to affect their behavior, in the same way that ADHD symptoms often fade into and through adulthood as the cortex matures (again, in more often in males.) Many of us can think of anecdotal examples of a male who in his youth was a hell-raiser only concerned with himself, then transforms into a devoted family man - but he still has a very steep empathy curve that drops off once you move outside the family. (That guy who dotes on his daughter but was in a biker gang when he was younger? He might actually be a very good father - but he still doesn't have much concern about anyone's pain but that of his wife and kids, and if you're past his steep sigmoidal drop-off, you definitely don't want to test that.)

I've looked for evidence of differing oxytocin levels or even ADH/vasopressin (or receptor mutations) in the literature about psychopaths and antisocial PD. If you accept crime as a proxy for low empathy, there's a small literature on testosterone's role, but it's not nearly as clear as you would think. For one thing, there's actually a meta-analysis undermines the argument that testosterone is behind the pattern in crime spike and then decrease after early adulthood (Archer et al 2001), and Ulmer and Steffensmeier (2014) point out that though testosterone does not drop precipitously after adolescence and very early adulthood, crime typically does. There is a vague signal about aggression dropping as testosterone declines with age (including in women - Dabbs and Harbison 1997) but neither this nor any of the previous studies track testosterone and crime in the same individuals, which would be most informative. Overall the research on decreasing crime is scant - it seems once these people stop committing crimes, we're less interested in studying them.

Ulmer JT, Steffensmeier D. The age and crime relationship: Social variation, social explanations. In The Nurture Versus Biosocial Debate in Criminology: On the Origins of Criminal Behavior and Criminality (pp. 377-396). SAGE Publications Inc.. 2014.

Posted by Michael Caton at 4:50 PM